I can see the University of California Berkeley’s Campanile Tower from my hotel room, the outline softened by coastal fog which rolled in sometime after midnight. On this cool morning, it has not yet dissipated. And I am out the door, early Sunday, walking back to campus after more than forty years. There are a few things on this visit, not many, that I want to find again, and one of them is fog. Within a block, I find something else: the scent of eucalyptus. It is the Mediterranean heat of the full day that brings the sharp scent out of the leaves – but the damp night air holds it close to the earth overnight, like a blanket. More prosaically, I can smell the extremes of urban poverty – a homeless man who spent the night in a doorway, urinating across the sidewalk. I’d rather have eucalyptus. In the deep shade of the West entrance to the campus, there is a trail ascending along Strawberry Creek.

Forty years ago I was an undergraduate liberal arts major here, one small and lost person among 26,000 students. Day to day life had an overlay of solitary worry; stretching a few dollars through the week. The price of my room at the Hotel Shattuck Plaza last night would have paid a month’s rent in 1970, in one of those shared and shabby apartments or boarding houses I could afford then. I remember being tired enough after a late shift at a residential institution where I worked then, to fall asleep on the ground in this same eucalyptus grove; head resting on my backpack.

Further toward the center of campus, the grove opens to Sather Gate and Sproul Plaza, I walk south along Telegraph Avenue — and here is the street culture of Berkeley. Street vendors with vaguely spiritual wares, chapbooks, jewelry rich with ancient symbolism; incense; Indian print fabrics. Who didn’t have, or even wear on occasion, one of those thin cotton print bedspreads? Most of my days, it was foot travel. I had a car to get to my job, east of the Oakland Hills but otherwise I walked or biked to campus. Telegraph Avenue was slow going, either way, around the vendors, panhandlers, and hawkers of political ideas. It was slow going to learn street smarts – who to pay attention to, who was potentially dangerous; what to do with feelings of social obligation, how to consolidate a personal ethic amidst the torrent of extreme opinions about almost everything; uncomfortable moments of what I didn’t know then, but recognize now, as white privilege.

In those days, thirty five miles east over the coast range and into the first hot and arid valley, was my parents’ home in Livermore. It was always a thought. I was on my own, my life was taking shape; they had sent me on my way. But they were within reach; the threads held. 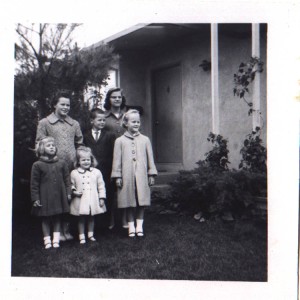 We had lived in the Bay Area — south of Berkeley, in Alameda — until 1959, when a job opportunity came up for my father in Livermore. I know this was driven by necessity as the family now included five children age 9 and younger. On the site of an old naval air base, the University of California was expanding its nuclear research laboratory – Lawrence Livermore Laboratory. Along with the Los Alamos Laboratory in New Mexico – home of the Manhattan Project — Lawrence Livermore became part of an alliance of the University of California and the federal Atomic Energy Commission. In the post war years, the government wanted to consolidate its nuclear research facilities, and did so under the leadership of Edward Teller, “father” of the nuclear weapon. The Livermore campus created thousands of technical jobs and a wave of suburban migration, us included. My dad, a machinist, maintained mechanical systems at the lab for thirty years.

Prior to the 50’s, Livermore was known for ranching , cowboys, rodeos, and vineyards — with a population of around 4,000. By 1960 it had grown enough raw new housing developments for Lab employees, to house 14,000 souls; and by 1990 there were four times that many. In the early 70’s it was the subject of an iconic and widely exhibited photo collection called “Suburbia”: images of changing times.

Acres of new and treeless streets, stucco tract houses alternating designs by every third lot, girls with big hair, men in white belts, mothers coming to the end of their usefulness in life, or so it seemed. Livermore was inflated and re-invented by the presence of the lab, and the Lab was there to figure out a way to keep using nuclear weapons. Their mission statement veils that message a little – but not much — “to strengthen national security through development and application of world-class science and technology — to reduce the global threat from terrorism and weapons of mass destruction”. Who could be against that –unless it occurs to you that reducing the global threat means figuring out how to keep on being – to quote Robert Oppenheimer – a destroyer of worlds; a purveryor of “mutually assured destruction”. It is the lunacy of believing that the world is made safer because we can threaten to blow it up at any time, and who wants to call that bluff, Dr Strangelove?.

But I did not always know this. How did I come to an adult understanding of what business was being conducted at the Lab, and what it meant in the world, and what it meant in my family? When I was in seventh and eighth grades, I became enchanted with the logic of science in general, and in particular, the emerging study of nuclear energy. If there was a project or class presentation, that’s what mine was about. I remember writing to the Atomic Energy Commission for anything I could find – government printing office pamphlets, posters, booklets. It was the year I moved up — from the children’s library in the basement of the Carnegie Library, to the main floor and the adult collection, including the science sections. My birthday present at age 13 was a kit for building an analog computer – more or less an electronic slide rule – but hinting at a complex future world. It absorbed a lot of hormonal energy that year. It was pure science, all about finding and understanding patterns and logic — or so it seemed to me — not so much about how it might be used in the world.

In my Catholic elementary school, in the midst of the reign of Pope John XXIII and Vatican II I was beginning to hear messages of social justice; but this was still a track that did not cross into the question of science and ethics. I was fortunate to land, in the following year, in a new and somewhat experimental public high school. Many of the faculty were graduates of UC Berkeley, and they were the generation of adults who had directly experienced the second world war. And arriving at the 20th year after the war, we were beginning to develop a historic perspective –in particular, the apocalyptic ending at Hiroshima and Nagasaki. And significantly, what had not happened during the second world war was now happening in relation to the Viet Nam war: citizens were questioning their leaders on the rightness and morality of this conflict. I have a vague early memory of knowing there were protesters – Quakers I think — outside the gates of the Livermore Lab. We were a family with a single car – mostly my dad drove to work — or my mother drove him if she needed the car. So it could have been a sighting out the station wagon window. It was clear by age 16 that I understood that the application of nuclear science in the military and political world was deeply troubling.

So here was a first experience, for me, of discovering that one is part of something that is larger and morally flawed – but there are benefits which would make it hard to give up. And I am sure that is the spirit in which my dad earned a living there. I don’t know how deeply he questioned the nature of the work. It paid the mortgage on our small tract house; filled our cereal bowls, paid for our school uniforms and graduation pictures. I was never successful, in my relationship with my father, with disentangling the issues from the person. It was hard to disagree about the war, or nuclear energy, without feeling that the relationship was on shaky terms.

The Lab has conducted a variety of nuclear research projects involving plutonium, among other highly dangerous substances, and has poured toxins into the ground water for more than 60 years, enough to win distinction as an EPA superfund site; enough to raise concerns about the increasing prevalence of childhood cancers. But I digress because right now I am only trying to walk across campus, back in time, step by step.

And to explain why I have been looking forward for months, with such anticipation, to this week in the Bay Area, to see old friends with roots in the same dusty home town of Livermore, and measure by comparison, what sense we have all made of our origins. We bonded at a time when our futures were only forming. We were all about potential. Now, it’s different. We can’t say we are done, but we are surely approaching the end of our careers, children grown, parents gone. Yet we are not done changing. We still have futures.

Julie, Susan, Marsha, Carol, Jennifer, Judi, Aileen. We have kept our connections across more than 50 years. They were waiting for me in the lobby of the hotel when I arrived last night – more than an hour late after my connecting flight from Houston was delayed. I’d spent an anxious six hours stomping around that dismal place, staring at the departure board as if that could make the word “DELAYED” disappear. Clearly it was not due to weather in Texas, or California. They will never tell you the truth about a flight delay, but I think they were waiting for a crew to be found. We made up some of the lost time during the flight, and I shaved off a few more moments in my rental car, crossing the bay bridge toward Berkeley at the peak of a glorious, clear and brilliant sunset over the water.