Take Your Daughter to Work Someday

My father went to work for the Lawrence Livermore Laboratory — popularly known as “the Rad Lab” –on October 1, 1959. What did he do? It was never very clear to me as a child. If I wanted to know something about my father – and I remember this vividly at eight years old – I needed to ask my mom. “He’s a maintenance machinist”, she told me. He graduated from Long Beach Polytechnic High School, and went into the Army shortly thereafter, in that gap of uncertainty between the end of World War II and the beginning of the Korean War. I am fairly sure that he learned the machinist trade through Union apprenticeships on the job. I remember knowing when I was very young, that he was studying at night for his job. I’d look at the books with curiosity but they were filled with indecip 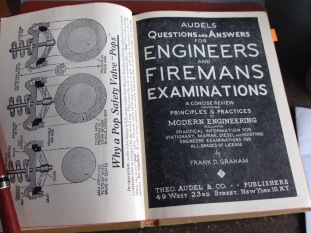 herable equations , no pictures, and very few recognizable words. I found one of those books in his study after his death – Audell’s Questions and Answers for Engineers and Fireman’s Examinations, published in 1953, with his neat square printing inside, his name and the address of our first home – 1537 St. Charles St, Alameda, California. Now I realize that he was studying for some type of qualifying exam. My father’s father was a tailor, a trade also learned as an apprentice to his own father. Our postwar Baby Boom generation was entering a wide new and meandering path toward a career – a four year liberal arts education.

The 1950’s were way too early for “Take Your Daughter to Work Day”, so I never saw the world he went away to every day. Over the years I could feel my brain retrieving those words “maintenance machinist”,  puzzling over their meanings, separate and together, piecing it together with the other traits and qualities I saw in my father: precision in the spatial world; but comparative silence in the interpersonal realm. Later, in my professional life as a therapist, I learned the term “alexithymia” — “ the sub-clinical inability to identify and describe emotions in the self”. I say that and take it back, because those years have taught me that it is a bad idea to pathologize every variation in human experience. There was nothing, it seemed, that he could not fix or build. I don’t recall that my mother ever had to call a repairman for appliance repairs – he fixed them. When we needed another bedroom because there were now six children to accommodate in an 1100 square foot home, he built it; if our cars needed work, he took care of it in the driveway; when he wanted a boat for fishing and waterskiing, he built one in the garage.

He retired an even thirty years later,in October 1989,  though he was re-hired a few days later in some sleight of hand  post retirement role, a few days a week.   In the thin manila folder labeled  “retirement“  that  I brought home after his death,   I found  a  final pay statement  which  included his job classification:  “Senior Plant Facility Maintenance Coordinator”,   a net gain of three words over “maintenance machinist”.  That same folder contained a dozen photographs  dated from 1961 to 1970, 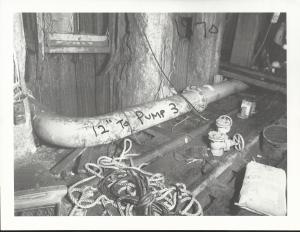 8 x 10, grainy black and white photos of   pump casings,  excavations,  complex mazes of pipes in dark underground tunnels, ladders descending into watery pits.  It’s hard to tell why these strange photos might have been saved.  If someone had asked him what he did, would this be how he would  wordlessly explain it?  Did it represent his best work?  Or is there a mysterious secret message  in these photos that hints that he was a whistleblower?

In the same folder, I found an award certificate,  printed on thin parchment paper, given in thanks for restoring power  and providing essential services during  five days in the summer of 1988.  I’d not heard of any heroic acts in that year of his life so I did a web search.

According to the Los Angeles Times for September 6, 1988,

“The electrical system at Lawrence Livermore National Laboratory, a key federal design facility for nuclear weapons and     Strategic Defense Initiative hardware, needs a $40-million overhaul, Livermore officials said. A spokesman said the defects were discovered as officials cleaned up after an explosion and fire that cut power for four days to the mile-square facility.”

LIVERMORE, Calif. (AP) The Lawrence Livermore nuclear weapons laboratory was shut down today after an electrical         transformer blew up in a fireball seen a mile away, touching off a series of explosions and fires.

The blasts and fires Thursday night at the laboratory, where nuclear weapons are designed, followed a power outage that plunged the 500-building complex into darkness, said laboratory spokeswoman Sue Stephenson. There were no injuries reported and the     three fires were put out in about an hour, she said. Most of the damage took place at the lab’s main switching substation, a long   metal structure.

”The windows were turned brown by the flames and firefighters chopped holes in the roof,” said Stephenson, who estimated damage to the building at $250,000.

The fires began when the main transformer in the switching building exploded, sending an electrical surge into transformers at the two other buildings, said Jay Davis, the lab’s emergency duty officer. The other explosions and fires were at power transmission boxes outside two other buildings. Those fires also burned some nearby bushes. Davis said that when the main transformer blew up, it sent up a fireball that was visible from his home, about a mile away. The fires were all several blocks from the high-security building where plutonium is stored and did not affect any section of the lab where nuclear materials are kept, Stephenson said.
”They are safe and secure,” she said.

I am sure he had to pass periodic security clearances for his work. But whether or not he was formally constrained from disclosing his day to day work life to anyone, he was already inclined toward silence. This sort of event would not have been shared with us over the dinner table — that part where you say “So how was your day?”

Dated that same year, 1988 – a year before the fall of the Berlin Wall, the symbolic end of the Cold War — was an administrative memo requiring that he notify the Department of Energy if he intended to travel to what were referred to as “sensitive countries” –tactfully interpreted later in the document to be “communist controlled”. Somehow I prefer  to think of them as sensitive countries. Such travel, whether official or not, required a “Foreign Travel Briefing” in which individuals were alerted to potential intelligence gathering methods they might encounter, and the defensive measures they might have to deploy. This was a common enough need that briefings were held on the first and third Mondays of every month. Having recently watched the television series, “The Americans”, a drama about espionage set toward the end of the Cold War, I am imagining those cheesy bar pickup lines, bad wigs, contraband taped under toilet tanks; verbal arrows aimed at one’s dark and secret vulnerabilities.

I could never get my father to say very much — so I’d have only been able to wish those Russians “good luck with that”.

When I think back on it, I guess my dad would have said he knew very little about my day to day work life either. Did he puzzle over the word “family therapist” as I puzzled over the words “maintenance machinist”? Could our worlds have been more different? I’ve had the experience of looking up to see confused, tuned out, or sometimes horrified looks from friends or family, when I try to explain the uplifting potential of family therapy with addicted and abusive parents and their tiny children.

So I’ve made another try at understanding what my father did for a living. I’ve been reading a few passages from Audell’s Questions and Answers for Engineers and Firemen . Old Audell apparently wrote down everything he knew, everything he learned over many years of experience. He comes across as a bit of a curmudgeon. He refers with concise contempt to greenhorns an 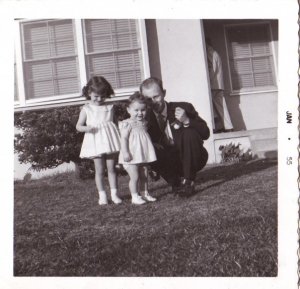 d ne’er do wells, nondescripts and highbrows. He cites their engineering practices as bad examples to never do. Most of his chapters float right over my head, but I find myself going back to a table that shows the rate of heat transfer from steam radiator to chilly room.

During the time I was working on this writing, I had a dream about my father. It doesn’t happen very often so it has stayed with me. In the dream I am at a meeting, maybe a community meeting of some kind. I am standing, and I notice my father crouching on the floor beside me. I  sit beside him and we begin to talk, at the same level, as we are in this photo; as if picking up a thread of a conversation that had been started years ago.

Note: I was curious as to whether LLNL ever got into “Take Your Daughter to Work” day… and they did! Within a year or two of its origins in the late ‘90’s, they were on board.  More women in science and engineering. Fewer girls mystified about what their fathers  did.